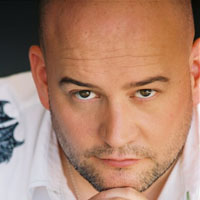 How did a composer go from writing jingles for TV and radio to working with some of the most respected composers in the industry. Trevor Morris is the composer of the popular TV series The Tudors and The Borgias and his debut blockbuster score for The Immortals was released last year. I talk with Trevor about his career so far and get an insight into his work approach.

And trust me, there’s much more in this interview.

Hi Trevor, It’s a great privilege to be able to talk to you. I’m a great fan of your work, I’m currently following the latest series of The Borgias which has been fantastic so far, so awesome work!

Thanks so much for that.

What was your first paid commission? How did it feel?

Well, my first first was believe it or not when I was 13, my music elementary school commissioned me to write a piece for piano and 4 part choir, to be sung by my graduating class that year. My fee was $50, which when you’re 13 years old is a fortune !

How did you get started scoring for media?

I began scoring TV & Radio commercials in my native Toronto in my 20’s, which wet my appetite for the magic that happens when music and images meet together in a meaningful way. That lead to my desire to have longer than 30 seconds to say what I had to say musically, so TV and Film was what followed.

I understand you moved to Los Angeles to pursue TV and Film. How did you land working with James Newton Howard and Hans Zimmer?

I got a job working as a pick up assistant for James through his then engineer Jim Hill, who remains a friend and does a lot of mixing for me. I asked James to work for him full time but he didn’t have a position for me then, but Hans had something open up and it just flowed from there. Scoring The Tudors was your breakthrough project and reinvented the costume drama in every production aspect. At what stage were you brought in and how did you approach working on it?

I was brought in late in the game, so the train was very much on the tracks at that point. I won’t lie, it was really tough on me at first. So my approach was both playing catch up to the rest of the production, and at the same time embracing what we now know, which is that
we were reinventing costume drama in every way. I was too busy at the time to let the gravity of that hit me, I was so buried I didn’t have time for that to sink in. So I just did the work.

But my approach was an extension of how I always work, which is to start by writing melodies. I wrote 6 or 8 themes before I started in hardcore. Some lived, some died, but it was my setting of the tone for my approach to everyone on the show, which is a melodic frame of mind.

Did the producers already have a brief for you or were you given full creative control?

You are never given full control! It was a lot of us trying to figure out the tone, it was the toughest part to be sure. We were reinventing the wheel really.

You said it was tough at first, could you go into more detail about the challenges? (Was the sheer amount of music, the style, the instrumentation?)

Mostly again about time frame, and the pressure to create something completely new, and yet still fit and tell the story properly. You begin by writing melodies. When you’re stuck for ideas, where do you turn to?

Classical music I guess, though the blank page syndrome isn’t as big an issue anymore. It’s more a young composer’s hang up (as it was for me when I was younger). Now ideas flow, it’s just more about fishing for the best one.

Were you already familiar with historical music and instruments or did you research to inform the score? Was the historical accuracy something that you considered?

I never claim to be nor want to be a musicologist. But my knowledge of the instruments of the period is pretty good, but I use them my way. So historical accuracy was not a concern at all for me. I never let anything constrain me in that regard.

What was the creative process like for The Tudors? Are you a pen and paper kind of guy?

Definitely not, I am born of the computer generation. I am surround by this unreal world of high technology, which is how I like it. But at the end of the day, they’re just tools to help me realize what’s in my head. That’s the point. Though I do have lots of acoustic instruments around me too, a beautiful piano, some Dulcimers and stuff like that.

But the process is somewhat the same, I conjure ideas and just pound away at them alone in my studio until they are perfect.

Was the music of The Tudors recorded, sampled or somewhere in-between?

Originally all samples with a solo violin on the tune, we later re-recorded the strings and choir live. You can really hear the difference from season 1 and 2, to season 3 and 4 if you listen to them back to back. How did you establish the ‘sound’ of The Tudors.

That question would take an entirely different interview! But the long and the short of it is, I just did it as I did it, I just let myself flow with what I was feeling until it happened.

What’s the most difficult aspect of scoring a project of this magnitude. A TV series is a huge amount of music!

There are many of many facets. But getting into the story and its subtext, of which there is a lot, is always the primary goal and challenge. I truly believe I serve the Story, I am its slave and it my master. So the better the story, the harder I have to work, if that makes sense.

Your latest historical score The Borgias has been a great success netting yourself another EMMY win for the title music. You’re making a name for yourself as the ‘historical drama guy’. Did you ever think you would acquire such an accolade?

The Historical notoriety I find funny, as I was so NOT that guy before The Tudors. I was more the action guy. But I am nothing but grateful for being known for something, it’s a tremendous gift that is not lost on me. Winning the EMMY was up there with the great moments of my life for sure, and no I didn’t think I would win, I was truly just happy to be invited to the party.

Did your experience with working on the Tudors apply to The Borgias? The Immortals released last year has been one of your biggest big screen projects. How was working on the score?

It was one of the great experiences of my career on many levels. Beyond being such a huge movie, the director and I got along well and the process was very smooth and positive. I got to conduct the best players in London UK at one of my favorite scoring stages, a renovated church in Hamstead London owned by Sir George Martin. How cool is that?

How was it different from the TV work you had done previously.

TV, Films and Interactive all share commonalities, and at the same time are all different. But a film of the size and scale of “Immortals” is by nature the big difference. Which is something I embraced and thoroughly enjoyed. I have worked on many many feature films before Immortals, so it wasn’t like my first rodeo.

The structure of working in a film music department has always baffled me. Could you shed some light for myself and my readers on how much involvement you have in managing and directing the other team members?

Managing is a big part of it, and is a learned skill, as opposed to talent which you naturally have. You’re the composer, so your point of view is why you got hired, so it’s a lot about getting everyone on board that view and aligning things to head the right direction. Sometimes it’s easy, sometimes it’s a never ending uphill battle.

You’ve worked on the soundtrack for various games (Need for Speed, The Sims, Army of Two), how does your approach differ to scoring for TV and Film.

TV & Film share a lot in common, but interactive is its own beast. NFS was my first game, and I credit the great gang at EA for being patient with me as I “learned” how to write for games. It’s too large a subject to go into in this interview, but suffice to say it’s a completely different way for your brain to think and organize. More like a Rubik’s cube then a painting, if that makes any sense.

What sort of studio/technology setup do you use on a daily basis?

My studio is very state of the art, a highly technology based environment. I am surrounded by many many computers and devices and peripherals. Which is the way I like it, I am big on technology. Its an enabler in a great way, not for everyone but it is for me. But on some level it comes down to my sequencer as composing tool, which is called Cubase, and a program called Pro-Tools for recording mixing. That’s the cliff notes version of it all. What projects have you got on the horizon?

Doing an action packed movie called “Death Race,” which is brilliant for me because it is SO different than The Borgias, it’s Rock n Roll ! The Borgias is back for Season III in the fall which is great too.

And hopefully a vacation in there somewhere to recharge the batteries.

What’s the one decision you made early on that’s helped you exponentially in your career.

Work harder than everyone else. There is no, absolutely no substitute for hard work.

What’s the most important thing you look to accomplish when working on a score?

Something that stands the test of time, that is not ephemera, that I can sing along with and still moves me emotionally. I get it right sometimes, and not on others, but I always look to accomplish it.

Here’s a fun one, what would you consider to be your musical superpower?

Bionic hearing. It’s a blessing and a curse. Though I’m not sure super power hearing is going to save the world anytime soon… but it’s helpful for me.

My readers are aspiring composers, what advice could you pass on to them?

Learn, persist, apprentice if you can, and above all, you have to work harder than the guy beside you. There really is NO substitute for ridiculously hard work, nothing makes up for it. Not talent, not personality, nothing. Its is the one and only key to success that I have seen proven true time and time again.

It’s proven true for me.

My pleasure, thanks for having me.

Please leave a comment below and tell me the best thing you learned from this conversation. I’d also love to hear your feedback on the interview.