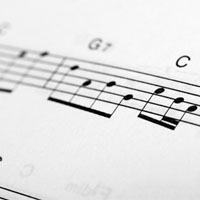 Of the many ways to add color and variety to a composition, harmony can be one of the more elusive. With a seemingly infinite palette of chords available to you at every turn, knowing which one to choose can seem like a combination of instinct and good fortune.

But those of us not blessed with a gift for harmonic fluidity are in luck; there is a systematic method we can use to incorporate more interesting and colorful chords into our compositions.

In this article I’ll discuss the first stage of reharmonization, diatonic substitution. This method is simply using a chord from a given key (diatonic) in place of another chord in that key with the same harmonic function (substitution).

The three basic functions of a harmonic progression are tonic, subdominant and dominant.

Tonic implies a sense of stability and rest, of being at “home”. In a major key the I, vi and iii chords are tonic.

Subdominant chords have a “going somewhere” feeling to them. They lack the stable restfulness of a tonic chord but are not particularly tense or wanting. IV and ii are the subdominant chords in a major key.

The Dominant is the most tense and unsettled chord. It has a strong urge to resolve to the tonic, to return to home. In a major key the Dominant chord is V, and you may recognize that an added b7 to a major triad creates a “dominant” seventh chord.

The seventh chord of a major scale, viiº is a bit of a conundrum. The diminished triad lacks the stability of a major or minor triad. In many ways the viiº triad is the upper part of V7, just without the root. For that reason, and because viiº contains the leading tone, we will treat it as a dominant chord.

(Clarification: In this article I am using the terms tonic, subdominant and dominant to refer to “harmonic functions” and not to scale degrees. Eg. although the scale degree name for the II chord is supertonic, the chord “functions” in the same way as the IV chord, hence it has a subdominant role. Likewise the VI chord rests on the submediant scale degree, but because it acts as a place of rest it “functions” like a tonic chord.)

The technique of diatonic substitution is very simple. As long as the melody permits, you simply swap out one chord of the same function for another.

Although it’s obvious, it is worth pointing out that a substitution is also a change in character from major to minor (or the reverse). This shift from a light to dark color is one of the main reasons for the substitution; we want to add interest and variety to an otherwise straightforward progression.

To illustrate we’ll use a simple I IV V I progression. It moves us from tonic through subdominant, dominant, and back to tonic.

First let’s swap out the tonic chord. Here we’ll replace I with vi:

Now we’ll try swapping out I with iii:

(Em to F with E to F in the melody creates unpleasant parallel octaves, but that’s a discussion for another day!)

Notice that I had to change the last melody note from C to E to fit the new chord. This will be explained below.

The only subdominant alternative to IV is ii:

And the only dominant alternative to V is viiº:

Conform to the Melody

When reharmonizing a chord progression it’s important to keep an eye on the relationship between the chords and the melody. Depending on the note in the melody, swapping out the chord could create some unwanted dissonances that detract from the point of the substitution.

The two intervals to avoid when substituting chords are b9s and tritone. Both of these intervals cause the chord to lose it’s main character and take on a different function or sound like a different chord than you intend.

In the following example, which we saw before, we have a simple melody and progression:

The options for substituting the first chord are the tonic chords Am or Em. But notice that the melody note of C would create a b9 interval with a chord tone from Em (B up to C is a b9).

To avoid this clash our only substitution option is Am, which works nicely with the melody note C.

Now let’s go through a few examples and see how we can change them up by reharmonizing via the diatonic substitution method.

Here is a simple melody and progression from the first part of Following the Leader from Disney’s Peter Pan:

The phrase is made of only chords with tonic and dominant functions. Here is how it sounds if I substitute some of the current chords for other diatonic chords with a similar harmonic function. The character of the piece has changed but the phrasing and direction has remained consistent.

Notice that the first chord has a Bb in the melody so my only option was Gm. A Dm chord would have created a b9 interval between A and Bb and caused an unwanted dissonance.

Although the last chord has a tonic function it certainly feels less stable than the tonic major chord Bb. The Gm feels like we have arrived somewhere, but we haven’t arrived at home.

I chose to keep the dominant chord as V7 because viiº did not feel strong in the context of this phrase, but it could have been an option.

For the next example I’ll use Twinkle Twinkle Little Star. It might seem odd to use a children’s tune on a site for professional composers, but it truly is the simplest examples that make the clearest point. I think that your extreme familiarity with the song will help make the change in character particularly conspicuous.

With the exception of V, I will substitute the major chords for minor chords with the same harmonic function. To avoid creating too much repetition I’ll keep one of the I chords in place.

The reharmonization creates a much sweeter song, partly because the chord tones in the melody are now predominantly thirds instead of roots and fifths. Thirds have a much gentler and more pleasant effect than the rigidity of the perfect intervals.

In most situations reharmonization should be used as a technique to add interest, not as a way to completely rewrite the harmonic progression of a song. Substituting only one or two chords with a diatonic alternative can be enough to breathe life into an otherwise plodding and hackneyed chord sequence.

Although the results are not necessarily groundbreaking the potential is clear. With a simple technique we can begin to move beyond dry and boring progressions and start exploring more interesting colors, without sacrificing the chord’s harmonic function in the progression.