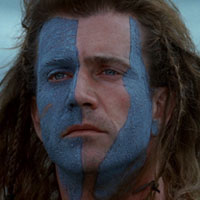 What James Horner’s Score to Braveheart Teaches Us About Modulation

Modulation is one the most important dramatic devices we film composers have in our toolbox. We can use modulation to increase the intensity of a scene, to propel the audience into a new frame of mind, and to get a lot of mileage out of a single theme.

In this article we’re going to take an in-depth look at how an James Horner uses modulation to bring out the significant shifts in a story.

As we analyze a cue of James Horner’s classic score from Braveheart, I’ll keep coming back to two core ideas. They both deserve much more detailed discussion, but for now here’s a general summary.

Here’s a quick examples. We have a little melody harmonized with diatonic chords. The melody note E is accompanied by an A major chord and it feels nice and happy.

But listen to what happens if instead we change the chord to C, a non-diatonic major triad:

The C chord feels far more uplifting, and in a weird way it even feels more “major”. Obviously a C major triad is just as “major” as an A major triad, but because it’s coming at us from outside the key the character of the chord is heightened.

2. There is a difference between a hit and a shift. A hit marks a specific moment as significant, such as a powerful action or an important line. A shift on the other hand, marks an entire change in the mood and character of the scene.

While a hit lasts for a moment, a shift can last for an entire cue. When you are able to back up and think about the major shifts in your cue you begin to have more control over the direction of the story.

Braveheart – They Will Never Take Our Freedom

In this clip from Braveheart, James Horner modulates three times. He starts in A Mixolydian, modulates to D Major, moves to D Dorian (the parallel minor with a raised 6th degree), and then brings it back to D Major.

Watch the clip first and then we’ll get into a deep analysis of Horner’s masterful use of modulation.

The beginning of the clip is A Mixolydian. Although you could make the case that this is just an elaborated A7 chord to prepare for the upcoming D Major, it is so long that you feel like A is the tonic. If the cue ended after 20 seconds on the pitch A it would not feel unresolved, which it would feel if we ended on a dominant chord.

Mixolydian is a great mode to use when you want a generally positive feeling but find that the raised 7th of Ionian (traditional major) feels just too darn happy. The b7 degree adds a sense of neutrality and softness.

Modulation #1 – A Mixolydian to D Major “Sons of Scotland”

The first modulation comes at :30 when Wallace says “Sons of Scotland.” As we already noted, A Mixolydian is arguably just an A7 chord, or the dominant of D major. Thus a modulation to D feels incredibly natural and satisfying. We would expect it, and having our expectations met feels good!

We land without doubt on a solid D major chord immediately after the line, and D major has become our home key. The mood is much warmer and nobler to accompany Wallace’s sense of purpose.

Modulation #2 – D Major to D Dorian “In defiance of tyranny”

Our next modulation comes in at 1:00, under the line “..here in defiance of tyranny.” The modulation is a change from one key of D to another, and so to make the transition as smooth as possible Horner ends the D major section with a perfect cadence, holds nothing but the pitch D, and then introduces new material in the minor mode.

Moving from the major to the minor mode (ionian to dorian) gives us a much stronger sense of minor than simply using a diatonic minor chord from the key of D major. If we had just moved to B minor we would still feel the pull of D major.

It’s sadder, but not necessarily much more tragic.

Instead, a move to the parallel minor (in this case with raised 6th degree) feels like an actual change in mood, like things have taken a turn for the worst. It’s more than a hit, it’s a shift.

Also make sure to notice that the shift is accompanied with changes in orchestration and texture. All of these elements help us feel like we have moved to a different place in the story.

So why Dorian and not natural minor? One reason might be that the Dorian mode has a certain Scottish flair to it (often associated with Ireland, but the feel is similar). Another might be the very same reason to use Mixolydian instead of Ionian; the raised 6th makes Dorian a “softer” minor key. It needs to be sad, respectful and noble, but it’s not a funeral.

Our final modulation comes at 1:40 when Horner moves back to D major around 1:30, after the line “Run and you’ll live. At least a while.” William Wallace has reached the hearts of his audience and captured their attention. Seems like we’re due for a shift!

Yet again notice that the shift occurs after an authentic cadence. The minor “tyranny” section has come to a complete close before Horner makes a shift to the major feeling for the rousing speech. And just like before, he holds out the note D for a moment without any other pitch before moving into D major. It makes for a very smooth transition.

Modulation with an authentic cadence is not a requirement, and surely should be used on a case-by-case basis, but obviously we can see here that it’s quite an effective technique.

And why parallel? My best guess is that it’s extremely smooth. We get a significant shift in mood from major to minor to major, without actually pushing the energy or intensity into extremely new heights. A raise in a half step would feel like we all of a sudden had much more urgency (that’s a topic for another day!).

Where To Go From Here

Have a different interpretation of the Braveheart clip? Or want to share your tips and tricks for modulating from a film composer’s point of view? Let’s hear it in the comments!