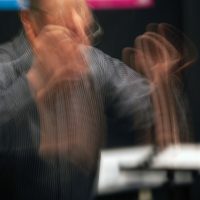 How To Conduct [Beginners Guide]

The act of conducting is an elusive and misunderstood art form that can often lead to confusion and sometimes ridicule. We often imagine a conductor as a megalomaniacal eccentric frantically waving their hands around and impacting on the music very little. Whilst it is true that some conductors do use very grand and bold gestures when conducting, it must be stressed that the role they are playing is vitally important.

It is not to say that without the conductor the musicians are reduced to clumsy and out of tune amateurs but rather that as in all areas of our life, sometimes a leader is required to keep things in good order.

In this article I will be discussing the importance of the conductor including their role and then some basic tips on how to conduct. Much like playing an instrument, these techniques are the foundation to build upon and should not be seen as advanced or embracing the subtleties that only comes with experience.

What is the purpose of conducting?

The job of the conductor can be split into two main roles embracing mechanical and expressive.

The mechanical role is to show the players basic information that will enable them all to play together as a tight unit. For example, a group of 16 violinists playing an identical rapid passage of music will have their own individual technique and interpretation.

Some will bow the notes quicker than others or have a slightly different phrasing or pressure on the strings. The conductor’s job is to homogenize the sound of 16 individuals into a perfect ‘section’ to allow the musical ideas to sound out clearly and precisely.

The other mechanical aspect is to indicate the beats in a bar so that players can feel confident about the speed and accent of the music that they have in front of them. Again, every musician can play their music but it is ensuring that they all play their music exactly in time with the conductors controlled beats to allow consistency.

Even more importantly the conductor must ‘drive’ his musician like a car by adjusting the speed of the music smoothly and with command. Excellent musicians should then be able to adjust their playing to match the beating of the conductor’s baton (the stick used) as long as they are clear.

Often in long orchestral music players may find themselves having long sections of inactivity and many bars of rests. Whilst the players could sit there counting frantically until their entry, it is the job of the conductor to cue in players and sections and this can be achieved by good eye contact and clear gestures.

The next role is somewhat harder to cover because it deals with the aspects of music that elude description. The expressive nature of conducting is the difference between a moving and dramatic performance that touches an audience and a cold sterile performance.

There are no lessons as such in this area and it is down to experience and personality to find the right balance between mechanical and expressive. Some of the most important expressive features of conducting are in balancing instruments dynamically.

Conductors must know the entire score back to front and have an acute sense of hearing in order to balance the volume of parts. A trumpet solo may be lost in one venue and overpowering in another even when the musician plays the notes at the same volume.

The conductor must judge this and where necessary give subtle gestures to encourage a change in dynamic. The word subtle is very important here as the audience should never be aware of these non-verbal communications during the performance.

The other important expressive role is in the use of rubato. This literally means ‘robbed time’ and is a flexible approach to the beat whereby sometimes the music is pushed ahead of the beat or pulled back to give more expression.

To avoid a complete lack of beat and timing the use of rubato should always be carefully graded so that any pulling of the beat should be complimented by pushing the beat and therefor returning a sense of equilibrium to the overriding pulse of the music. When the two roles are combined effortlessly then you have the makings of a great conductor but as with most things, in order to reach that level of mastery one must follow a strict course of training and discipline in order to hone the technique required.

4/4 time indicates to us that there are four crotchet (quarter note) beats per bar. In order to show this with our conducting pattern we must ensure that the clearest beat is beat four which in this context will be known as the upbeat (regardless of how many beats are in the bar the upbeat always indicates the last beat of that bar).

When starting a piece that is in 4/4 time you will need to give an upbeat to the players which should contain all of the most important information they need such as the speed, dynamic level and expressive quality. It must be clear and only begun once all players are alert and ready to respond.

Once you hit the first beat of the bar (in this context known as the downbeat) there can be no turning back so the upbeat is vital to the success of all of the musician’s starting together and the piece working.

Below is a diagram indicating the direction for each beat. Beat one (downbeat) goes down with beat two moving out to the left and beat three moving across to the right. Beat four (the upbeat) should then move up and across to the left to the point where you first started your down beat.

Beat four should be the clearest of all with the other beats taking on a somewhat secondary role. As long as you have a clear upbeat it will make it a lot easier for musicians to drop back in should they lose their place or have an issue.

Remember also that the size of your gestures should match the dynamic level of the music and even if you use very small gestures to indicate a quiet volume there should still be enough differentiation between the main beats and the upbeat. One good tip is to have a little more lift or spring in the movement to enable players to see this when the gestures are particularly small.

Conducting three beats per bar is not too challenging and only requires the conductor to remove one step from their movement. If we remove beat two from the diagram above then you will notice that a triangular down, right and up pattern is present.

One challenge that can be commonly faced is conducting three beats at a very fast tempo. How can one show the gestures clearly enough during a very quick waltz for example? The key here is to conduct 1 beat per bar which a yoyo effect as the downbeat springs immediately back up again with the ‘123’ being counted within that duration. This means that players essentially just see a downbeat and an upbeat which in very fast music is enough to keep them in time and secure.

How might we start conducting in unusual time signatures where there are more beats in the bar then? For the example of 5/4 it must first be decided how the beats are divided up in the music. Often music will have a certain musical stress with emphasis on certain beats rather than every beat being equal.

A common stress in 5/4 time is to have the beats grouped in three (123) and two (12). By counting this way you will notice a musical lilt or emphasis between the two groupings.
To show this in your conducting gesture you would need to show the 123 beats center and left. In this case a down beat followed by a small beat to the left and a clear additional beat moving out to the left further. Beat four would move across to the right (like beat 3 in 4/4 time) and then the fifth beat would serve as the upbeat.

The coverage in this article serves the purpose of introducing the basic concepts of conducting and an introduction to how to show the basic beats per bar. As mentioned earlier the process of taking the mechanical and injecting the expressive can only be taught so far and it is through experience that the real learning takes place.

I hope this article will give food for thought and a new found appreciation when watching the conductor at work. One must remember that we are not always fortunate enough to work with professional musicians and so when working with an amateur ensemble it is very important to be clear in gesture, good at non-verbal communication and an excellent listener.

Good luck on your journey to musical mastery!