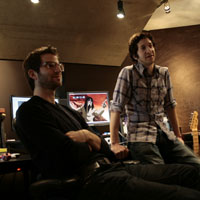 The Track Team is a music and sound design production company in Los Angeles, California, co-founded by Jeremy Zuckerman and Benjamin Wynn. Since 2004, the Track Team has been a purveyor of artistically and technologically innovative audio in the realms of television, film, commercials and video games.

How did you get started scoring for the screen?

The timing was really serendipitous – just when I started feeling antsy doing commercials, Bryan Konietzko (Ben’s roommate at the time) came to Ben and me to see if we were interested in composing the music and sound design for Avatar: The Last Airbender. Ben and I quit our jobs and set out on our own to commit to ATLA. I don’t even think we blinked. We knew from the start that Bryan and Mike were creating something really special and we jumped on that train…

Benjamin Wynn: I started taking piano and trumpet lessons while in grade school growing up in Chicago but I never became very passionate about them. Music didn’ become a passion in my life until high school when I got some turntables and a sampler. Once I discovered that you could record and manipulate sound I was sold. I quickly started to spend all my time working and thinking about music. After high school I studied photography (which was my other passion) for two years at the University of Wisconsin at Madison, but when I learned that you could study electronic music at CalArts I quickly transferred. There I studied synthesis, composition, world music, percussion, etc. It was a really fun, open environment for experimentation and learning, and it taught me so much. CalArts is also where I met Jeremy. Once we graduated we were both working for different music houses (mostly doing commercials) but we would occasionally work on projects together. It was fun, and our way of working and thought processes complimented each other so once we got the opportunity to form a company we dove in. J: I’m still trying to figure that one out! Sometimes it’s so painful and sometimes it flows effortlessly. The thing about deadlines though, is that you have to create regardless. There’s definitely something to not having a choice!

Really, it depends on the project. There are constants though. It all depends on how much time I have to worry. Probably will spend a third of the time doing that and then once I can’t do that anymore I start making decisions by asking questions. One of the first is figuring out the sound palette. Orchestral, non-western, acoustic, electronic, computer, familiar, unfamiliar…? If we know we’ll be writing for live musicians we’ll spend a bit less time on the production side of things because you can actually write more economically. Here in Los Angeles, we’re very lucky to have access to some of the best musician’s in the world whose performances have so much weight and go such a long way.

I work with an orchestral staff paper book in front of me and use it as a kind of notebook. It’s really quite disorganized but it works for me. I’ll have several ideas scattered all over the place but I seem to know where everything is for the duration of the project. Really, it’s kind of challenging for me to nail down my creative process. I guess I try to find a balance between not getting too comfortable and not abusing myself by making things harder than they need to be.

B: Starting projects tends to be the hardest thing for me to do. I’m backwards from a lot of my friends but I’m good at finishing things but have a hard time (mentally at least) starting them. I’ve learned some tricks over the years to get going, but really there’s only one answer: time. You need to work and work until you hit upon that one idea that gels everything together. Once I get there I’m good, the rest is easy. But there are no short cuts, you need to work to get there.

J: Ben and I have very similar setups. We try to keep things pretty simple. We don’t have a mixer, just our computers, couple good mic pres, couple good uncolored mics, apogee convertors, pass labs amps, 88 key midi controller… I’ve got a surround setup in my room and a bunch of guitars, guitar amps and several non-western instruments including a recently acquired guzheng that is really beautiful.

B: Yes, we’ve found that the most important things are having a well-treated room (where you can make noise at all hours of the night), a good monitoring system, and good converters. The rest is really icing on the cake. We both tend to like minimal setups, as it can allow for better focus. What’s the most interesting project you’ve been involved with?

J: Well I think Avatar was the deepest in the sense that we were a part of it from the very beginning and got to see it through to it’s conclusion. Also, since it was our first major project, there was an incredible amount of discovery and growth involved. Nearly every episode was a profound learning experience all the way to the finale. It opened up a lot of roads for us, both musically and career-wise.

Ben and I do a lot of stuff outside of scoring which is interesting and fulfilling in completely different ways. I’m finishing up work on a dance piece for the Scottish Dance Theatre which has been very interesting. I was able to go back to my computer music toolbox for that one. It’s been several years since I’ve worked so acutely in that domain and I’m definitely a different composer now than I was then. I like to think I’m less of a purist now which has made it a lot more fun.

B: I’ll ditto Jeremy’s remarks on Avatar. As far as television projects go, we’ve definitely grown the most on that project I think. It was a huge learning experience and something that we’re both proud of.

In terms of our own projects, I make and release electronic music under the name Deru as well. In 2007 I got the opportunity to co-score a ballet for the Paris Opera Ballet with Joby Talbot. We recorded a string quartet, an 8-piece choir, and then added electronics to the piece making it a pretty unique hybrid I think. The dance, called Genuswas about Charles Darwin so Joby and I mapped out a trajectory and evolution for the music before we started. This was a new way of working for me and having a graph of the piece while working was hugely helpful. Then seeing this piece performed in the Palais Garnier was a humongous thrill. The ballet is just starting to tour around so getting to go to these premieres is really a joy. How have you gotten yourself out there?

J: I think it helps that there’s two of us. But in addition to having a wide social network, I think it’s really important to cultivate relationships with people you respect on a personal level and on an artistic level. Making relationships early in a career is key. Most directors have their creative team in place early on. You need to be a good judge and know quality and integrity when you see it and treasure that.

Also, I notice more and more that I have to ask for something to get it. Sounds obvious but it’s amazing how overlooked that is. I had a music teacher growing up who would often say that he sat around waiting for things to come to him and that was his biggest mistake. I wasn’t sure what to do with that information but always kept it in the back of my mind… I wish I had something more concrete to offer but aside from some general approaches (follow through, be reliable, do your best on every job because you never know who will see it, don’t smell bad, etc…), I think everyone has to find their own path.

B: Again, ditto to what Jeremy said. Personal relationships have been hugely important to us, and I tend to think they’re similarly important to everyone. We produce music for projects (and the music needs to be good!) but at the end of the day it’s the interactions and relationships that everyone involved in the project will remember. And you also can’t be afraid of failure. Send your music to people! You never know what will happen. My life is different to this day because I sent out 30 demo CDs in 2001.

For the all the up and coming composers out there, if you could share one tip, what would it be?

J: Now more than ever, a composer needs to have a wide skill set. Know how to engineer and how to make a great sounding production in addition to composing. Really it could be argued that in today’s world, production is a part of composing. Additionally, the more skills you have the more ways you can get your foot in the door. It’s important to apply your creativity to every aspect of your career. In other words, you will probably have to think outside of the box to find your own path.

B: I would say that when you’re starting out it’s important to say yes a lot. Every new experience makes you grow and learn new things, especially if they’re things you wouldn’t normally do. Find people who are making interesting videos or movies (at the local art collage, or even on youtube or vimeo, etc) and tell them you’ll work for free. These are potentially the people that you will still be working with years later.

And most importantly you have to be passionate. I’m confident that I would be making music if I wasn’t getting paid for it. Passion is what keeps you learning and striving to be better, and music is one thing that you can always be better at. That’s one of the reasons I love it.