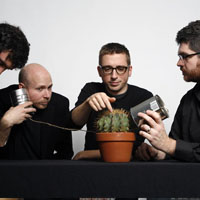 So Percussion is an exciting band, enthusiastic about performing new music and keen collaborators with some of the worlds current leading composers. I talk with Jason Treuting about their work and gain an insight to contemporary percussion music.

What has been your biggest influences as musicians/composers?

That is a big question to try to answer, especially for a band like ours. Between the 4 of us, we have lots of influences to throw in the pot. On a long ride in a minivan between concert stops, the conversation will drift from Perotin’s vocal music to Boogsie Sharpe’s Phase II steel band to the National’s newest album to Miles Davis’s band of the early 70’s to the legacy of Cage’s 4’33”. I would list John Cage and Steve Reich as 2 huge influences from the American experimental scene. And the Kronos Quartet has been a group that we look to a bunch as chamber musicians looking to draw from lots of influences.

Right now, I am thinking lots about Keith Jarrett and Fred Frith. They both approach music from many angles and drift between the composed and the improvised in a very sincere and natural way. We’ve been exploring our own way into overlapping those two worlds in our most recent work called where (we) live. As a composer, I am very interested in the way Fred Frith puts together evenings of music that contain very specifically composed pieces broken up with purely improvised pieces as well as everything in between. I also have been thinking lots about visual artists like Robert Rauschenberg and Jasper Johns, and Andy Warhol to some extent too. I find myself (and I think So as a band finds itself as well) interested in music where the very structured collides with the unstructured or when processes collide with chance. Jasper Johns found that mixture in his number pieces and those paintings of known objects like maps or flags or bulls-eyes where the structure of the stencil collides with the more personal and uncontrolled world of the brush strokes. I am very into that mixture and have been exploring ways to smoosh those two worlds together musically in a satisfying way.

How important has your collaboration with composers been?

I suppose that collaboration is really the essence of what we do. We mainly play music that is being created now, for us or with us. And we look to work with composers and musicians that are interested in an active partner in this collaboration. We’ve looked to find collaborators that work in different ways. Sometimes that means composers coming out of this contemporary music scene we run in, but it also means folks working in other worlds that we think would write interesting music for the four of us to play. In the past this has meant folks like the electronic music duo Matmos, who we have an ongoing collaboration with that led to an album this past summer called Treasure State. We also have done some great playing with Kneebody, a jazz quintet based in LA/NYC and lots of playing with the electric guitarist and improviser Grey McMurray. And lots of our work lately has come in collaboration within the band, putting together large scale projects as writers and creators. So yeah, collaborating with interesting artist/musicians/composers is really the essence of what we do. Many have commented that So Percussion embodies more of a band persona rather than an avant-garde ensemble. Is this a conscious decision?

Yeah, I suppose it has become quite in style to be perceived of as a band and not an ensemble. I think more and more we are interested in being who we are. It is too tiring to try to be anything else. What we are is complex, so speaking about it concisely is the biggest challenge. I think the persona as a band comes from lots of the work we do as creators and in collaboration with folks like Matmos and more recently Dan Deacon. Most bands are creators and performers and it is hard to pull the 2 apart. The idea of an ensemble in classical music, whether avante-garde or contemporary music or chamber music, seems to connote the idea of interpreters rather than creators. Though we always feel very invested and vital in the work we do with composers, sometimes our roll is more as interpreters than creators. And sometimes we even play old music that was written for other folks, like Steve Reich’s early percussion work or John Cage’s work for percussion, and in this way we are purely interpreters. We hope to embody all those things and that is a conscious decision.

What advice would you offer composers writing for percussion instruments?

Though these instruments, or at least way of making music by hitting things, is one of the oldest forms of music making, in the western classical tradition, it is one of the youngest instruments to write for and there is very little history to bog anyone down. There are very few conventions and through this short but vital history of percussion music in the 20th and 21st centuries, percussionists are called on to be open to many types of notation and flexible with the way they make music. In “classical” works for percussion, performers are asked to play sirens, car horns, flower pots, brake drums, whistles, record players, tin cans, conch shells, cacti, etc, etc. My advice to composers is to make friends with percussionists and write music for them. Ask them to stretch outside their comfort zone and, in doing so, discover new and interesting ways to make music. There is lots of ground out there to still discover and I think this happens best through an open-minded approach to experimentation and the wacky things that come from it.

As a performer, what type of music would you like to see more of?

As a performers, I want to play music that needs me there specifically. I am drawn towards music that allows for a piece of me to enter the process and for the end result to be partly mine. That isn’t to say that all good music works in this way, but that what I look for. When So works on a new quartet, I want my part to reflect my uniqueness as a player and my strengths. As we invest more and more in these collaborations, we are getting lots of music like this and that is lots of fun as a performer. Percussion music has a history of great music from composers like Cage, Morton Feldman, Xenakis, David Lang and others that allow for the performers to choose the instruments they are playing within instrument groups laid out by the composer. That is a real easy way for the player to feel involved in the end product of the piece. Intense, sincere collaboration where the composer really listens to the players feedback as they construct the piece yields this result too. There are many other ways for it to happen too.

What does 2011 hold for So Percussion and new music?

2011 is pretty full of collaboration that we are really excited about. We just played a show with Dan Deacon in NYC that had 40 minutes of new music for So plus Dan. That is a really great start to a long term collaboration that will surely take us into some exciting and new territory. In March, we are premiering a new pieces by Bobby Previte called Terminals. It is in 5 parts and each part pairs So with an improviser in a concerto kinda format. The improvisers include Jen Shyu singing, DJ Olive, Zeena Parkins on electric and acoustic harp, John Medeski on organ and piano and Bobby Previte on Drums. That promises to be wild too. In April, we are playing a solid new collection of pieces by Glenn Kotche. We are big fans of his drumming with Wilco, his solo album on Nonesuch and the music he’s been writing for folks like Kronos and Bang on a Can. The sketches we’ve seen and heard of this piece are pretty great! And we are playing the new quartet Steve Reich wrote for us at Carnegie Hall in late April. We’re also mixing a great new quartet that Steve Mackey wrote for the band called It is Time for an upcoming CD. Lots of fun stuff and that gets us through April. Lots going on these days, but we are really excited about these projects and can’t say no to interesting things! And I guess we’ve been writing music along the way for So’s newest project as creators called where (we) live. I really love my job!