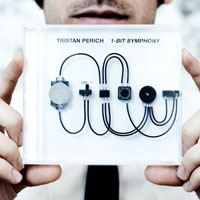 Tristan Perich’s 1-Bit Symphony is an electronic composition in five movements on a single microchip. Though housed in a CD jewel case like his first circuit album (1-Bit Music 2004-05), 1-Bit Symphony is not a recording in the traditional sense; it literally “performs” its music live when turned on.

How did you come up with the concept for 1-Bit Symphony?

1-Bit Symphony had been a while coming. In 2004, when I began working on my first album, 1-Bit Music, I hadn’t quite figured out exactly what I wanted to say with the sound and concept, and since it’s release I’ve felt the need to pursue it further. Having already made the statement of releasing an album as a microchip, I got to dive headfirst into the music itself, and explore the various musical ideas I’d been circling around in my acoustic compositions. It was a great experience to spend a few solid months working in a very specific sonic medium. The idea of creating an electronic symphony gave me a big frame to fill. I think in the end I finally said what I wanted to say.

Where did your interest in bit music come from? I was a total nerd growing up, in love with math, physics and programming. While I was also composing scores for acoustic ensembles, the computer programming stayed at a distance. I didn’t feel like I had anything to say about electronic sound. It all changed when I began programming microprocessors like the one in the center of 1-Bit Symphony. All of a sudden, computation, something that previously was abstract and virtual, was grounded in the hardware. It took on a physical presence, and I almost had a sense of the electrons shuffling around in the microchip as it executed the lines of software. Code became something more tangible, and electronic sound was its way of speaking. The sound was raw, gritty, primitive and fresh. My friends were exploring similar sounds in the chiptunes scene and I played some shows with them. Ultimately, my compositional ideas returned to scored music, and I now consider the violin or other acoustic instruments to be closely related to speakers playing back 1-bit waveforms.

How did you come up with the presentation of the work? Why not just a traditional CD recording?

Working in 1-bit allows me to get rid of many complicated layers of hardware, and to focus on the relationship between code, the data it outputs, and sound. When the microchip spits out 1s and 0s, they are on and off pulses of electricity. When you connect that to headphones, the electricity activates the electromagnet, moving the speaker membrane and creating sound. By releasing the complete circuit as a physical object, it allowed me to emphasize the process of electronic sound. A recording is not the same as a performance, and in this case listening to the physical album is profoundly different experience from listening to an mp3 of the music. That’s not to say I care if people consume the music on their mp3 players. It’s just different. (You also can’t exactly record the infinite final track.)

How did you go about programming and putting the device together? I write code in Assembly, a computer language that is closely related to the functionality of the hardware itself. I programmed a system to realize musical scores, which I coded as sequences of numbers. That code gets transferred to the chip in a process obtusely similar to synching your music player. The devices themselves were all assembled my a fantastic team of assistants here in my studio in NYC.

Is each performance of 1-Bit Symphony identical or will there be variations?

Nothing is identical in our analogue world. That said, digital systems work with a subset of information from the world around us, and in that domain…. yes, each playback of 1-Bit Symphony is theoretically the same as every other one. The score is the same, the code is the same, and there is no randomness or other interactivity. However, one variation is that each chip runs at a slightly different clock speed, so some devices are higher or lower pitched than others.

Describe your creative process when writing music for this composition. Do you start on pen and paper or a 1-bit medium from the beginning?

Composing for me is a combination of a bunch of systems, from playing keyboard instruments, to working with sequences of numbers, to sketching ideas in audio software and testing them in hardware. I grew up scoring with a pencil and staff paper, and my process has grown from those roots.

What has been your biggest influences as a composer?

Like many composers in my generation, the biggest influence hands-down was Philip Glass, whose epic early works are the epitome of the beauty of process. Besides composers like him and Steve Reich, I’m inspired by the work of electronic musicians like Ryoji Ikeda and SND.

This year I’m beginning work on some very large projects, hour-long works for ensembles of 50 violins and 50 speakers, a concerto for solo piano in a sea of forty speakers. I’m building a audio installation with 1,500 speakers tuned microtonally to span four octaves. And I’m always continuing to explore how line can fill space with my machine drawings.