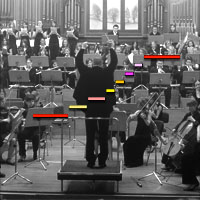 The Art of MIDI Orchestration (Part 2) Mahler said the essence of orchestration is variety, variety, variety. I interpret this to mean that textural variation is of significant importance in orchestrated music. One moment music is homophonic, the next polyphonic. One moment only the winds are playing, in a choral-style texture, followed by a monophonic tutti or some other change in orchestration. Heterophony is commonly used to create melodic variation: One instrument (or several) play the primary melodic element while another outlines that same melodic line by playing only notes which accent the melodic curve. This can be done at the unison, at the octave; there are countless variations using this technique. A closely related technique is that of the join, drop-out, split and merge.

Transparency is the principle by which all timbres that are used are contributing musically to the texture. If a timbre is not contributing, it should be removed. With a transparent texture, the listener hears the overall effect of the many timbres playing together, but one can also easily hear the individual parts that make up the orchestration.

The orchestrator strives to blend and balance sound, to create contrast and unity through the combinations of timbres. By blend we mean that when numerous timbres are sounding together, the overall effect is pleasing and no one instrument stands out unless the orchestrator wants it to. By balance we mean that the elements all sit well in their frequency and amplitude domains, that there is a conscious effort to allow which elements are primary in the texture, which are secondary, and which are playing a more subliminal role. This means also that balance is a function of structure as material that precedes and follows will likely determine how the composer decides what is primary, secondary or playing some other purpose in the texture. From a mastering standpoint, there must be a robust mid-range. If the middle frequencies are not there something will be missing. Every frequency you boost or cut affects other frequencies. If the bass is cut 2dB, the mid-range is now louder, relative to the low frequencies. Bob Katz discusses this in great detail in his book Mastering Audio, the best book I know of on the subject.. Balance is also about tweaking velocities and Control 7 (volume) so that the dynamics of each voice contribute to the effectiveness of the whole.

In the acoustic world, the role of the composer, conductor, mixing engineer and mastering engineer are often four different people. In the virtual orchestra world, orchestrating and mixing are sometimes indistinguishable, and mixing itself becomes a kind of conducting, albeit in virtual, or programmed time. Sonic balance is a concern throughout the process, and if great care is taken, the mastering engineer won’t have a lot to do, although it always helps to consult with a mastering engineer from time to time. One’s attempt to bring objectivity to their inner voice can only go so far. We sometimes lose awareness of the biased way we use our senses so having another set of ears can help verify what is working and help disclose any problems that may have been overlooked.

The Virtual Space: Panning and Reverberation

Many musicians like to pan the virtual orchestra by following the seating arrangement of the acoustic orchestra. But listening to music through two speakers is missing some of the sonic information that the concert hall provides so a technical response is required. The double basses in the orchestra are usually off to the right side of the ensemble. But with two speakers, the bass sounds best in the center. If you’re producing in surround this won’t be of use, for now I am assuming stereo as the default. I prefer the 1st and 2nd violins panned hard left and hard right , violas soft left, cellos soft right and basses in the center. This gives a full stereo panorama of strings. When the 1st and 2nd violins are playing two distinct melodic lines, the stereo separation helps create the illusion of a larger space.

An instrument sometimes employs a dynamic panning scheme, where the pan changes and fluctuates with the interplay of the pitches and rhythms, thereby using pan as dynamic rather than passive element in the mix. This is commonly done with percussion but can be done with any sound or voice.

With the winds, I tend to use reverb to create a softer, rounder sound, but in considering a smaller ensemble this may not work as well. To understand how to write better for the wind family listen to a piece such as Stravinsky’s Octet for Wind Instruments. The virtual winds have been know to sound like an organ if the composer isn’t paying close enough attention and/or the sample library is not of sufficient quality. A generous amount of reverb, fairly dark with a two second or more reverb time helps to soften the winds and blend them into the texture better.

Unlike in some acoustic situations where something may be recorded dry, I always monitor and record the virtual orchestra with reverb, and try to settle the reverb parameters early in the process. When I find a reverb I like I stick with it until I feel the need to change it. With singers every voice is different and may require a unique coloration of reverb. Though there is not one correct way to use reverb, reverberation is a critical element and even small adjustments in filtering, amplitude, or decay time can help produce a more expressive sound.

Voicing the chords in the virtual orchestra should be done with utmost care. The study of harmony and counterpoint will greatly help the process of orchestration. But so will listening to textures in nature. Sitting by a river while a freight train passes by generates a profound counterpoint of rhythms and frequencies. Listen to sound in the real world and the natural world as often as you can. Pay attention and you’ll be amazed at the way our brains process this information and project, imagine and hear music in what seems inherently unmusical.

It is in voicing that we choose the size and width of the chord on the vertical plane, but also on the horizontal as melodic motion. Orchestration is an interaction of harmony and melody, enlarged by timbre and texture. A balanced chord is one in which each note in the chord is at the right amplitude relative to the other notes. This is partly a matter of taste, to be sure, but a poorly voiced chord lacks integrated cohesiveness and balance and can upset the flow of the texture.

Prior to the theory of harmony, musicians did not think in terms of chord progressions. It wasn’t until the 18th century that the French composer Rameau developed an accepted theory of chord progression and functional aspects of harmony. When we unconsciously assume that simultaneous melodic motion is nothing more than a chord progression, we have further codified the function of melody and have forgotten that harmony evolved from counterpoint, and that the linear aspect of chord motion is as vital as the chords themselves. This is one of the reasons I highly recommend dodecaphonic study: It greatly helps in developing a new understanding of voice-leading, one that urges resolution with the tonal traditions but that in itself offers a whole new set of options in your compositional tool kit and re-focuses attention on the contrapuntal aspects of composition, or at least one in which identifiable chords play a less important role in the form of the composition. Yet remaining on one chord for many measures, as in minimalism, can have the same effect: It can allow you to explore new contrapuntal conditions which changes the role harmonic progress has in your work.

If we consider melody, harmony and harmonic progression, and rhythmic motifs as a way to assign structure to the musical impulse, certainly timbre and any possible vibratory movement within each timbre also may contribute to the structure. Orchestration, defined by this way of thinking, includes all uses of sound as a means of evoking texture. Whatever sounds we use, be they samples of acoustic instruments, complex synthesized textures, voice, live instruments, sounds occurring in nature and in everyday life, or sounds totally generated and processed via computer, there is an art and a craft to assembling these sounds in a meaningful and expressive way. Since all the sonic arts take place in time, we must always be cognizant of what came before and what came after the moment in the composition we are working on.

Unity and variety are two great concerns: Too much unity, or too much repetition without variation, and we run the risk of introducing predictability and boredom, too much variety or lack of structural cohesiveness and we admit chaos that may lack intelligent variation and design. I strive to create compositions that have autonomy (everything seems to belong together) and inevitability (the music seems rightfully determined to resolve the way it does). This is not an easy undertaking as there appears to be inherently contradictory demands which require much thought, patience and musical insight to solve satisfactorily.

We are very fortunate to be living in a time where it is possible to access a liberal body of musical knowledge, literature and recordings. This makes possible the study music of other times and places, which can only advance our musical awareness.

Mastery of the basics is key to orchestration. All progress depends upon a clear understanding of the basics. The two basic ideas of inner listening and objectivity mean simply that as you listen to your work, listening becomes merged with imagination. This greatly quickens the creative response, but there a craft must develop, an objective understanding of your music and aesthetic.

Every project you complete is an outgrowth of what you have accomplished in an earlier work. The way to improve your orchestrations is by repetition, practice and analysis. It is no secret that the symphony orchestra’s incredible richness, balance and beauty of tone is a great learning tool for any musician seeking to advance their knowledge of orchestration. No matter what style of music you write, it cannot hurt to study orchestral scores to see how master composers created their orchestrations. There is an ideal of beautiful sound and every generation of composers searches anew for this ideal.

In your own music, pay close attention to the harmonics in your orchestrations, listen to your sound deeply, and strive for clarity. Even if you don’t want to sound anything remotely like a symphony orchestra, there is still much to learn by understanding how to infuse gesture, intention and expression in your work.