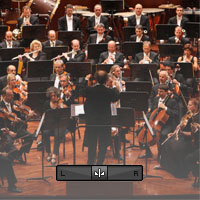 A lot of careful work goes into creating a successful digital mock-up: you have to work with good samples, use them effectively, and make sure that the final mix mimics the sound of a real recording — but how?

Even if you have the best samples and have set up your reverb well, you still have some work to do. Luckily, it’s quite simple and can make a significant difference in how real your mix sounds. The missing link is panning, and this tutorial will teach you to be aware of how to use it to your advantage.

If we consider reverb to be a means of changing the depth of a mix by simulating distance between the listener and the instruments, then we can think of panning as the way we change the horizontal positioning of the instruments in the mix.

You likely recognize it from mixes where it was used as a special effect, where an element pans from left to right and back again, giving a sense of motion:

But there’s more to it than just flashy special effects.

Panning is a deceptively simple technique that tends to be overlooked by many media composers. Despite the advancement of sampling technology, trying to render an orchestral tutti with everything centered will produce the dreaded “organ effect”; a complex interference artifact that results in several frequency ranges being strangely boosted and distorted:

The effect is most obvious when contrasted against a properly panned alternative:

Don’t worry if you didn’t hear it at first: panning is one of the more subtle influences on our perception of realism and it mostly acts subliminally unless we’re paying attention or it’s used in an extreme manner. Here we can notice the most significant difference between a properly panned mix and a poorly panned one: clarity.

The initial version has all the instruments crunched in the center, so even though they sound like they’re playing in a hall, it’s as if they’re nothing but a giant totem pole of brass instruments. In other words, if you close your eyes, you’re not hearing individual sections so much as one integrated wall of sound. The second version has the instruments panned appropriately so that even though it’s a tutti, you can still clearly distinguish between the trumpets, horns, trombones, and tuba.

To demonstrate the importance of this clarity, we need to look at a different type of example.

It’s all well and good to be able to differentiate between sections in a tutti segment, but where panning can really help elevate the realism of a mix is in the more agitated sections of a composition.

Let’s take a short passage for strings only. Here is the initial version first:

When the sections are playing independently, it sounds pretty good, but you’ll notice in the final section where they’re all playing together that the frequencies start to stack a bit strangely and you get an unfocused sound. Let’s hear it with the strings all panned according to usual orchestral seating:

This time, we can clearly distinguish between the violins, violas, celli, and basses and when they’re all playing together the effect is a more defined sound.

You can, of course, pan your instruments wherever you want them in a mix; and indeed some genres of music require very specific panning to sound legitimate. The symphony orchestra tends to be among the trickiest in terms of instrument placement simply because there are so many instruments and the arrangement of an orchestra varies depending on several factors.

For instance, there is no real “standard” when it comes to the arrangement of a modern orchestra. Broadly, the strings go in front, followed by the woodwinds and brass, and finally percussion in the back, but where each individual section is placed horizontally depends on whether it’s a large symphony orchestra or a small film score orchestra.

For reference though, let’s take a look at a basic seating chart:

This chart is a useful reference, but it shouldn’t be taken as a one-stop solution. For instance, if you’re sequencing a piece with a prominent solo part, you may want to have the soloist panned closer to the center to be clearer and louder. Likewise, you may choose to deviate from typical seating arrangements if you’re looking for a unique or unfamiliar texture.

Panning is as much an art form as the rest of mixing, and deciding how far to pan your instruments is not just a matter of technicality but also of taste.

When crafting the illusion of realism, you can also use panning to augment your reverb setup for creating a sense of depth. If you think about it, assuming we’re imagining an orchestra playing in a hall, the further back you are from the stage, the less defined the sound is and the closer everything sounds to the center. If you’re looking for a very clear sound then you’d probably sit closer, in which case the horizontal positioning of the instruments would be much more obvious.

In this way, you can use panning to help simulate sitting closer or further from the ensemble while maintaining the sense of hall size with your reverb.

While panning is a necessary and subtle tool for polishing up the realism of a track, you have to be careful with it because over-doing the panning can result in strange things in certain listening scenarios. For example, while your track may sound great with a certain wide panning in stereo, it may well be that listening to it on a mono system — a phone, cheap computer/laptop speakers, etc. — will cause the balance of levels to be way off and distort the intended sound.

That being said, try experimenting with how you pan elements of your track and see what results you get. It can be a subtle effect, but the results are definitely noticeable if well implemented!