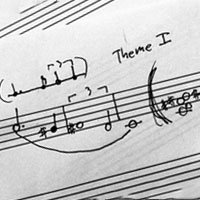 Themes. They are what give a musical work it’s signature. They’re what people hum when they exit the theater, and they can help give your score structure unity. Whether abundant or few, simple or complex, themes can add a compelling layer of meaning to music for moving pictures.

Aspects of a Musical Theme

A theme or motif can be thought of as a (simple or complex) musical statement, hook, or sentence(s) with its focus on one or any combination of the following elements:

Singing In The Shower

Melody is on the one hand the most obvious place from which to approach a theme, but also probably the most mysterious in terms of its emotional impact. It encapsulates your emotional response and is a summation of all thoughts/feelings/ideas about a theme or character. Is it light and brisk, or dark and plodding? Is it a succession of quick notes or long sustained ones? What is its shape? You can tell the story within a musical sentence: imagine how the melody might struggle initially, floundering, until it reaches up and soars in the high register, clear and defined? Or perhaps the melody is moving along happily before it is struck down, having to find its way back to where it began.

Listen To Your Heart

The literary material may suggest rhythmic ideas. Rhythms are often visceral and related to action. The well-known Shubert song [i]Der Erlkonig[/i] (based on a poem by Goethe) is an eerie tale of a father and his dying son riding through the woods pursued by the invisible and menacing Erlkonig, and the urgent triplet figure employed by the composer mimics the furious galloping of the horse. Marches, waltzes, and other rhythmic forms each have their own symbolic meaning which can be used to great effect, as can a lack of rhythm (a feeling of stasis) or a labored, sluggish figure. On a more subtle side of things there’s meter. What does 4/4 suggest vs. 5/4 or 7/4? Establishing a rhythmic feel and later upsetting it by changing the meter or emphasizing unexpected beats can create a feeling of uneasiness or disorientation.

Don Davis’ use of off-set, flowering crescendo horn and trumpet clusters is undeniably memorable and central to defining the [i]Matrix [/i]trilogy. Dario Marianelli’s climbing chord progression (featuring very interesting suspensions) during Evey’s ‘rebirth’ scene in [i]V for Vendetta[/i] underscores the tragedy and momentousness of the moment. Major and minors chords, suspensions, and dissonances can wonderfully expand concepts and create tensions and releases as necessary. In terms of variations, a melody can go through much change by use of interesting harmonic content which itself can tell a story – you may choose to have an unresolved tension underlying a theme for a character that resolves at a pivotal moment in the film.

More and more, we are seeing the use of shorter, simpler motifs and sound design. This is largely due to the aesthetic tastes of the day, but can still be quite successful at creating emotional resonance and structure. The title sequence of Lost brings to mind twisted and eerie radio-like ‘signals’. An interstitial double “gavel strike” sound let’s you know you are watching an episode of Law and Order, while the use of a Waterphone is tied to shifts in ‘reality’ in the [i]Matrix[/i]. A combination of a sound effect motif and a musical theme can also work in tandem: for the opening titles of [i]Bottle Shock[/i], Mark Adler made an interesting decision by creating a percussion track of empty wine bottles being played in different ways. These examples show how one can draw on very specific ideas within the story and turns them into salient musical ideas.

This Lovely Melody Needs An Escort

It’s worth considering how the accompaniment affects the feeling of the theme. This can apply to the notes and rhythms as well as the orchestration. William’s use of choir and an ancient Celtic text translated into Sanskrit for Duel of the Fates ([i]Star Wars Ep.1[/i]) gives the battle scene a mysterious, ancient, and ritualistic tone3. A counterpoint line(s) can battle or support the melody, and a fugue like structure can suggest complexity and sophistication of thought, as with James Horner’s score for [i]A Beautiful Mind[/i] which helped bring to life John Nash’s mental processes while performing extraordinary mathematical computations. Chaotic accompaniment or dissonant harmonic structures have their own unique emotional signature, and can help create a confusing and anarchic feeling.

Get to Work, You Lazy Thematic Statement

A common error occurs when we begin writing music which parrots the action or emotion on the screen (this especially found in poor comedy writing). Unless you are going for a cartoon style and “Mickey-Mousing” the action, this is redundant and actual counter to the purpose of music in film. You don’t want to simply underline what is already there. If screenwriting is focused on telling the story via subtext, action, and symbolism (and we know the structure of film music is literary) then we should be aiming for the same. When at its best, music in film should be adding a distinct layer while supporting the on-screen action, and saying something that isn’t already apparent but needs to be said in order to move the story forward.

Consider the emotional demands of the story and how they might be dealt with musically. If a character is putting on a brave face but is breaking on the inside the music may be required to help tell this part of the story. How do you present your theme as “broken”? You may re-harmonize it, create dissonances, use fragments, or introduce notes. A quick theme can have its note values lengthened in order to turn it into a dirge. A great example of this is Williams’ slow, methodical destruction of the romantic but sorrowful “Across the Stars” theme, as Anakin moves closer and closer to becoming Darth Vader in Revenge of the Sith.

Staying with Williams’ for a moment, we have an example of how a musical theme can be used to connect ideas, in this case, across different films within the series:

One of the film’s major curiosities exists in the actual use of the “Battle of the Heroes” theme in “Anakin vs. Obi-Wan.” The duel […] is broken up in rhythmic progression by several note-for-note regurgitations of the Cloud City duel cue in The Empire Strikes Back during which Vader hurls equipment at Luke before smashing the shaft window. The intention of Williams and Lucas was obviously to draw parallels between the two duels (and represent how history tends to repeat itself in this saga)

This brings to bear the significant power of musical themes and how they can be used on a very subtle (almost subliminal) level to cue the audience. They may not even be consciously aware of the music, but again – it’s that subtle layering of meaning which creates structure and sophistication.

It’s really worth putting in the time and mental effort to come up with a great main theme because this can be used as a basis for so much additional musical material. Each variation can be employed for a specific emotional or storytelling purpose and feel very different from the original while maintaining that psychological and formal link to the main theme. You can also depart entirely from expectations and counter the original intention of the theme. For instance, the music from the video game [i]Star Wars: TIE Fighter[/i] turns William’s themes for the Empire on their head. In the game, you are playing an Imperial fighter pilot, and so the originally ominous and foreboding themes for the Empire are re-cast as heroic and triumphant.

You can create variations using the aforementioned elements of melody, rhythm, harmony, and accompaniment, and with the addition of an almost endless list of others include changing the tempo, note durations, pitches, color/orchestration, dynamics, compass, using inversion/retrogrades, and on and on. Where The Hell Am I?

Creating a visual map or chart, where you plot out all the characters, dramatic events, and arcs over the course of the film, can be very useful. Using this, you can pinpoint the exact moments where you might employ a theme or variation, and also get a birds-eye view of the whole work. You will note how things interrelate between acts and scenes, and can make sophisticated decisions on how to help tell the story. Let’s say you have a theme for a character that undergoes a dramatic internal change during the course of the film. If the music is going to tell that story (using a slowly evolving variation on the character’s theme), the map will help tell you exactly where you should be at, and prevent you from letting the cat out of the bag too soon. But What Notes Do I Write?

I’ve purposely left out any indication of what you might actually write in terms of a theme. How you come to write the music is a very subjective thing, and ultimately your method of solving that problem and how successful the result is a matter of your own specific personal genius and all the things that make up your creative constitution. However, it is important to remember that in our roles as filmmakers the story is the ruling force by which we abide – it sets the parameters for our creative work. Knowing how to analyze and understand narratives is crucial to your ability to communicate with filmmakers and write music which supports the story while adding a subtle but effective layer of meaning. Themes can be an important aspect of this process, and will also be the way in which you ultimately add can your own personal comment to the work.

A wonderful resource is available for free download online, and for further reading I recommend it. These are annotated scores which detail the various cues and use of themes in Howard Shore’s music for The Lord of the Rings Trilogy (in PDF format):