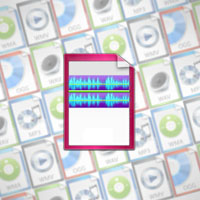 Audio File Formats: Everything You Need To Know

The flood of file formats in today’s audio industry can be a headache for those who haven’t kept up with the developments. If you’re looking for a one-stop reference for what the major formats are, what all the terms mean, and when you should use each, then you’ve come to the right place. Let’s get started by clarifying some terminology.

Codecs, Formats, and other Funtimes

When we’re talking about digital audio, a file is going to fall into one of three categories:

These categories exist as a result of the perpetual toss-up between audio fidelity and file size. In an ideal world, we’d have infinite storage space and be able to use totally uncompressed audio in every scenario for maximum quality, but the reality is that it’s not practical to do so in most cases.

Files in any of the three categories will be saved in various specific formats, the majority of which we’ll briefly look at below, but before we do it’s important to make a distinction between a file format and a codec. A codec is an algorithm designed to encode and decode digital media — it creates the data itself. A file format, on the other hand, is more like a container in which the data is stored. There are many more formats than codecs, and certain formats are capable of storing more than one kind of media data.

One other term that is often associated with digital audio (and other files, in fact) is metadata. Metadata can be considered all the “extra” information that is included with a file. In the audio world, it usually consists of album art, artist name, album, composer, etc. Many formats allow this information to be encoded directly into the file for ease of use.

Essentially, you’re only going to be worrying about the file format in most cases, since the codecs are fairly standardized and not generally toyed with too much for audio delivery purposes.

The first of the major digital audio categories is the easiest to explain. Uncompressed audio is exactly what it sounds like: raw, full fidelity data with no missing or altered information. Consequently, it takes up the most hard drive space, requiring upwards of 10MB per minute of audio. Typically, uncompressed audio formats are used for large-scale theatrical and television broadcasts, and for storing or archiving audio.

Major formats in this category include:

This category has been the subject of many developments in recent years, surging from obscurity to mainstream very quickly. Audio that falls into this category is compressed; that is, its original data is made smaller by use of algorithms that can intelligently shrink the file size.

Lossless compression is a newer method of reducing file size and requires more computer power to play since the data is reconstructed in real-time as you play the file, resulting in a nearly perfect (hence ‘lossless’) reproduction of the original uncompressed data.

The advantage is that you maintain audio fidelity and use up much less space, but the disadvantage is that it’s not efficient when you’re trying to minimize resource usage as in, for example, a game engine, which must play and combine files during gameplay.

Here, then, are the major players in the current world of lossless compression formats:

Lossy compression is the most frequently encountered and is the most relevant for media composers because we are typically called upon to deliver our materials in one of these formats.

Of course, the fact that the compression is lossy means that there’s no reconstruction happening when you play back the file, meaning that they’re also much more efficient. This has made them the mainstay of game audio and other mediums where both size and efficiency are significant considerations.

Let’s take a look at the major lossy compression formats:

When To Use What

Whenever it comes to delivering for film, television, or other properties that are likely to be mixed professionally and displayed on very good sound systems like the ones in theaters, you will want to deliver in uncompressed formats. Which specific format will depend on the preferences of the audio engineer that will be using your files, but typically you can rely on WAV as your workhorse delivery format. If you can, consider delivering BWF because the ability to embed timecode data right in the file makes it that much easier for the mixing engineer to place your cues exactly where they’re meant to go. Uncompressed audio is also the preference for archiving your music files in the best possible quality, of course.

Games are possibly the more inconsistent medium when it comes to what format to deliver in. Sometimes, you’ll be delivering the uncompressed audio and letting the audio engineer figure out what format to convert it to, but in many cases you represent the entire audio team so you need to be able to make good decisions. Nowadays, music assets are frequently encoded in the OGG format because of its good balance between quality and size, but games for mobile platforms and Flash games will often still rely on MP3 to keep the file sizes as small as possible for more compact delivery.

Losslessly compressed audio formats tend not to be used in media properties because playback requires real-time decompression, which wastes precious processing resources. On the other hand, they are quickly establishing themselves as a favorable alternative to the older lossy algorithms for delivering music for listening purposes and even for compact archiving.

One last thing to consider is that even though you’ll be delivering a lot of lossy files, you should make sure to always make a fully lossless audio rendering of your work. This archival version can be yours to keep in case the project files get damaged or lost, and it allows you to easily go back and re-encode in a different format without having to re-open the project to do so if necessary.

Obviously, in most cases the format you’ll be using will be the one your producer asks for, but if you ever get a say in the matter you will now be equipped to give an intelligent recommendation!